Microsoft is building  Windows 8 PCs for every language from different corner of the world. According to the recent Windows 8 blog post, Windows 8 users will be able to install additional display language they want instead of using pre-installed one.

In current Windows system, users can add additional display language through Windows Update or Microsoft Download center, which make no sense. In Windows 8 Microsoft has added new Language preference section in the control panel, which means no more need to look for the languages  around the websites. You get list of available languages in one place i.e New Language preference section.

The main view of Language preference section display the list of languages enabled on your system. In above Screenshot, Hindi and English languages are enabled on Windows 8 system. You may add or change, switch to another languages if you want. To add new language click on Add a Language tab. 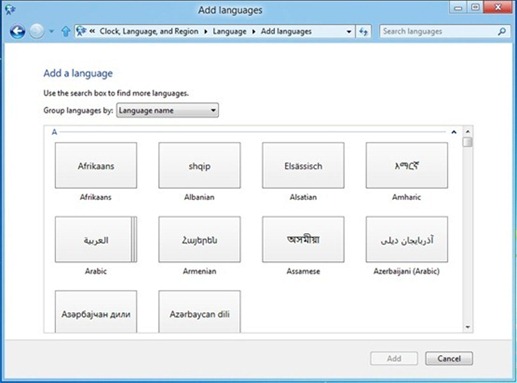 Select the language you want to use. Once selected, language is added to your list but does not download and install the display language until  you choose.