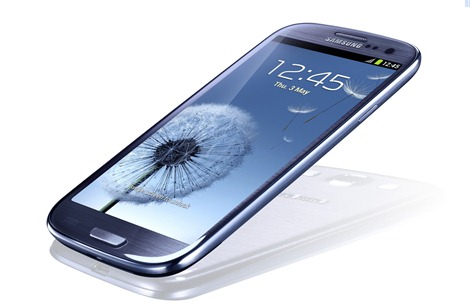 Samsung Galaxy S III  Smart Stay features identifies how you are using device, and adapt itself for better user experience. Let’s say, reading an e-book or browsing the web for instance – by having the front camera identify your eyes; the phone maintains a bright display for continued viewing pleasure.

The New S- Voice feature listen and responds to your words. You can control most of the function  like capture photo, Snooze alarm, play music using your voice commands.

In addition to face and voice detection, Samsung galaxy S III can recognize user’s motion. For example if you are messaging someone and decided to call that person, simply lift you phone to the ears and Samsung Galaxy S III will detect the motion and initiate a Direct Call to call the person.

The New S-Beam features let’s you to share content on the go even without Wi Fi or cellular networks.  S- Beam expands the Android Beam functionality which allow user to share 10 MB data in a sec by simply touching the another Galaxy S III phone.

In addition to all these exciting new features, Galaxy S III bundles ‘Photo Buddy Share’ function to share pictures, ’AllShare Cast’ to connect device with your television wirelessly,   ‘Pop Up play’ to play video anywhere on the screen while doing your task simultaneously and many more.

The Samsung GALAXY S III will be available from the end of May in Europe before rolling out to other markets globally.