Space Elevator, a concept that have been used for decades  by futurists and science-fiction movies/novels  going to be a reality.

Today Tokyo based Obayashi Corp. has unveiled a project to build a giant like Space Elevator by 2050  that would carry the passengers  towards the sky to a station 36,000 kilometres above the earth. 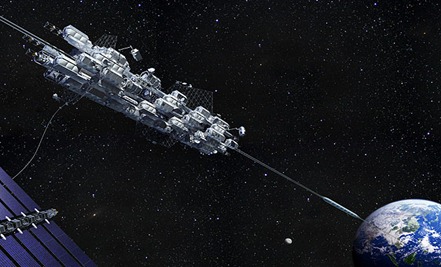 In this project, a cable build of carbon nanotubes would be stretched up to 96,000 kilometres or about one-fourth of the distance between the Earth and the moon. One end of the cable would be anchored at a spaceport on the ground, while the other would be fitted with a counterweight.

According to the company, 30 passengers car would transport people to the station using ‘Magnetic linear motors as means of propulsion’  at 200 kilometres per hour – which would be seven and half day trip to the station. The terminal station would house laboratories and living space.

"At this moment, we cannot estimate the cost for the project," an Obayashi official said, according to Yomiuri Shimbun. "However, we’ll try to make steady progress so that it won’t end just up as simply a dream."