It was just a month that beta was announced and now Mozilla has released final version for Mozilla Firefox 9. The Latest version of Mozilla Firefox fixed several stability issues and also added improved support for HTML5, MathML and CSS. 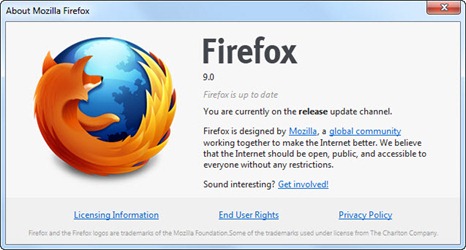 In addition to that Mozilla Firefox 9 features Type Inference that reduce execution gap in compilation for JavaScript typed language. This compilation mode, which is the default in Firefox 9, speeds up major benchmarks like Kraken and V8 by over 30%, and gives a large speed boost to many JS heavy websites.

What’s New in this release:

Mozilla Firefox 9 is now available for  Windows, Mac, Linux and can be downloaded from below links.