Today, Microsoft has officially confirmed that Windows 8 will be supporting Hyper Virtualization(Hyper-V) technology.  Hyper –V originally released for Windows Server PC will now be able to function on Client OS via Windows 8.  Hyper-V will lets users to test,run more than one 32-bit or 64-bit x86 operating system on the same Machine at the same time. Instead of working directly with the computer’s hardware, the operating systems run inside of a virtual machine (VM).

Hyper-V will run on Windows 8 64bit OS with atleast 4 GB of RAM.  It requires a 64-bit system with Second Level Address Translation (SLAT) support. SLAT is a feature that reduces host CPU/memory utilization for memory intensive VM’s.  It offloads memory management to the hardware. SLAT is present in the current generation of 64-bit processors by Intel & AMD. 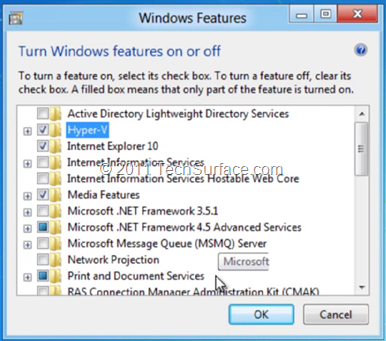 Hyper-V’s dynamic memory will allocate and de-allocate memory dynamically needed by the Virtual Machine and share unused memory between VMs. You can run 3 or 4 VMs on a machine that has 4GB of RAM but you will need more RAM for 5 or more VMs. On the other end of the spectrum, you can also create large VMs with 32 processors and 512GB RAM.

Windows provides two mechanisms to peek into the Virtual Machine:

The VM Console: It provides a single monitor view of the VM with resolution up to 1600×1200 in 32-bit color. This console provides you with the ability to view the VM’s booting process.

You can Share graphics on multiple monitors, Use of Native Multi-point touch interface with VM, sharing clipboard and folders between Host System and  VMs.  And finally, with RDC, you can also attach any USB device directly to the VM.

An interesting feature is Hyper-V’s “Live Storage Move” capability . Live Storage allows you to move the VM’s storage from one local drive to another, to a USB stick, or to a remote file share without needing to stop your VM.  And also Hyper-V allows you to take snapshots of a virtual machine while it is running. A snapshot would save/commit everything and you can roll out to previous point in case of trying to debug tricky problems.