The Google Chrome WebStore debut 9 months back  was only available for US Market. Since then, Google Chrome Webstore acclaimed huge success with an ever increasing selection of apps, extensions and themes. 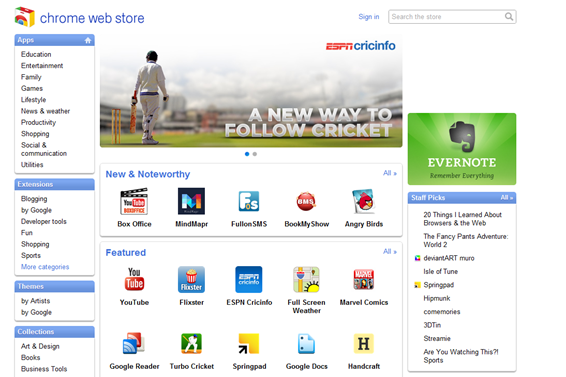 The Google Chrome WebStore was accessible across the whole world but its primarily having United States based Application for US residence only. With this launch, other countries oriented application will be delivered to specific Webstore. Now, you’ll be able to access a range of new applications, extensions, themes to Chrome from international developers and Publishers.

You can now listen to your favorite Indian music from Saavn. For those of you with a cricket fix, the ESPN Cricinfo app lets you follow the latest developments in your favorite sport and the TurboCricket app allows you to play your favourite game anywhere. Avid news readers can catch up on the latest Bollywood gossip on Midday and news in Hindi with Jagran.

The opening of Google Web Store in India and other countries also opens doors for International developers and content providers to join the Chrome bandwagon and take their apps global.