When it comes to viewing photos, we think bigger is better. Facebook had announced that it started maximizing size of photos by almost 20 percent to 720 pixels. That means, the photos you share on Facebook are going to be bigger (720 pixels to 960 pixels) and company claims to load twice as fast.  And the photos you’ve already uploaded to your profile will also be displayed at this higher resolution.

Facebook also rolling out more streamlined photo viewer light box that features a cleaner interface that makes it even easier to enjoy your photos. The light box is now set against a simple white background that puts more of the focus on the photo, and less on the surrounding frame. 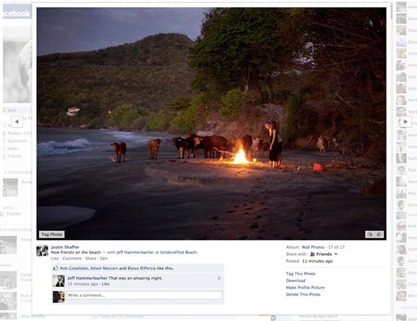 “With over 250 million photos uploaded each day, sharing pictures is one of the most popular activities on Facebook.  We are constantly working on making Facebook Photos better and today we’re introducing some improvements to the way you experience photos. “ Facebook’s Justin Shaffer said in a blog post. ” After we launched the first version of the photo viewer earlier this year, we received feedback from many of you and have made changes based on it.”