NASA planning an unprecedented project, named Solar Probe Plus  to visit and study the sun closer than ever before by no latter than 2018. NASA’s small sized spacecraft will directly enter into the sun’s atmosphere about four million miles away, from our star’s surface. It will examine a region where  no other spacecraft ever has reached. 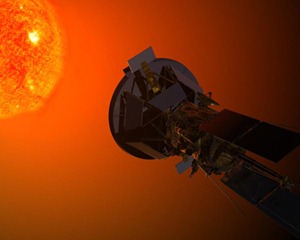 The experiments selected for NASA’s Solar Probe Plus are specifically designed to solve two question of solar Physics with which we are struggling for a decades are as follows:

The revolutionary carbon-composite heat shield of spacecraft must withstand temperatures exceeding 2550 degrees Fahrenheit and blasts of intense radiation to be in Sun’s atmosphere. The spacecraft will have an up close and personal view of the sun enabling scientists to better understand, characterize and forecast the radiation environment for future space explorers.

for more information about the Solar Probe Plus mission, visit: http://solarprobe.gsfc.nasa.gov/